After a few months of writing, the combined EYPO and EYO performed my Fantasia on Essex Pop Songs at the Sounds of Essex festival in Colchester Castle Park on 1st July 2017 under the baton of Robin Browning.  Last week, the EYPO (under the baton of Matthew Andrews) performed the piece at Christ Church Chelmsford, to many pleasing comments from the audience and staff. Thanks to Charly Richardson and Peter Lovell for the invitation and as a former member of many Essex Youth ensembles (ESSO, 2EYO, EYO, EYOJB, EYOBO) and later a pastoral tutor, I was pleased to write this.

You can watch the performances here via Facebook & YouTube and trace the original songs and their artistes’ locations with the pop videos below. Some are easy to detect, others not so much. 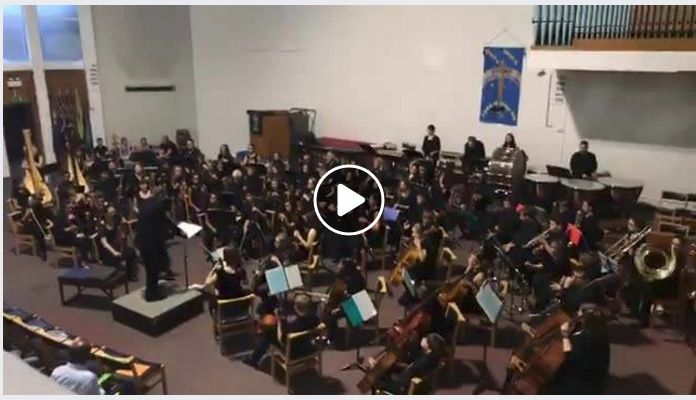 Motif 1 – ESSEX = E Eb Eb E X
It’s always good to spell a few things in hidden code. Eb is pronounced Es in German and a cymbal crash is usually scored with an X in the notation.

Song 1 – Blur: Parklife (Colchester)
This is my main recurring theme (apt for a performance in Castle Park). It can be heard in the opening fanfare (melody, bassline and the tritone harmony on “Parklife”).

Song 2 – Jane Taylor: Twinkle Twinkle Little Star (Colchester)
The lyrics are from an early 19th-century English poem by Jane Taylor, who may have written this in Colchester (although Ongar likes to stake a claim for this too). This is used during the rapped verse of Parklife which is hard to do with an orchestra!

Song 3 – Yazoo: Only You (Billericay)
A great synth based song by Vince Clarke with Alison Moyet although he wrote it when with Depeche Mode. It was later covered by The Flying Pickets.

Song 4 – Nik Kershaw: The Riddle (Great Dunmow)
This is special to me as it’s the first edit I made when listening to the Radio 1 chart show and the Capital FM chart show back in the 1980s. As it was at / around number 1 I managed to change channels and punch in an extra couple of verses and chorus whilst listening live! The military snare pattern is used towards the end of the Fantasia too. Here’s the Extended 12″ mix. The string players have to whistle too to replicate the synth whistle on the track.

Song 5 – Blur: Parklife (Colchester)
This is a short woodwind exploration as a “Lament for Colchester”.

Song 6 – Saint Etienne: He’s on the Phone (Chelmsford)
Not so well known as the others, this upbeat dance track has great string writing and the piano semiquavers. I decided to half the tempo of the verse but keep the chorus the same speed and add some powerful french horn swoops. The piano part is the same – minus the pop rhythms.

Song 7 – Olly Murs: Troublemaker (Witham)
A great song, reminiscent of Maroon 5. I couldn’t help but turn this into a Corelli & Vivaldi style Concerto Grosso for Flute, Oboe and Bassoon. The melody and bass were written out in quavers and decorated – however, the funky string riffs and glisses were kept in. Notice that the slow introduction also includes the chorus in phrases 2 and 3. It’s always great to write fugally. Those A level classes really paid off!

Song 8 – The Prodigy: Firestarter (Braintree)
The opening famous riff (played by Colchester Institute former tutor Jim Davies!) is hidden in the Vivaldi style build up during Troublemaker. On another note, I went to school with one of the drummers from the band: Kieron Pepper. #PTND

Song 9 – Depeche Mode: Never Let Me Down Again (Basildon)
Listen to the great orchestrations already in existence in the track. Here’s the 12″ extended mix to highlight the great brass, strings and choir.

Song 10 – Gorillaz: Sunshine in a Bag (Colchester)
A little quote of “I’m Happy” thrown into the Depeche Mode track. So many songs to choose from!

Song 11 – Sade: Smooth Operator (Clacton)
Famous at the time of Live Aid (some 32 years before the July concert in the park!), Sade’s full 9 minute version of Smooth Operator is below. The official video features her as a spy after a corrupt politician. I had to cut down the music in the arrangement but would have loved to use more. Robin Millar’s production (probably string arrangement too) is great and heads off into a Latin American frenzy!

Song 12 – Pixie Lott: Mama Do (Brentwood)
This debut single is catchy and fun for the orchestra with handclaps and some brassy orchestration lifted from the track. The violins are comfortably stretched with some Louis Clark style arpeggios (from the Hooked On Classics & ELO era), another influence of mine and, thankfully, a colleague since 2010 or so with the English Pops Orchestra and HOC.

Song 13 – Suzi Quatro: Can The Can (Chelmsford)
A great rocking track that I couldn’t help turn into some Prokofiev (Romeo and Juliet). This is a well used orchestral piece from The Apprentice and Robbie Williams’ recent track Party Like A Russian.  Oh yeah, I taught Suzi’s daughter at Chelmer Valley High School. Notably, Suzi was in Happy Days as Leather Tuscadero and also turned down Elvis’s request to go on tour with him.

Songs 14 & 15 – Blur: Parklife (Colchester)
The first transition is performed with tremolo strings, harp, glock and piano. This leads into an extended wind exploration “Hope for Colchester”.

Song 16 – Blur: The Universal (Colchester)
A great ending features this song – already well orchestrated – plus the Nik Kershaw snare drum pattern and some Sgt Pepper french horn parts to celebrate the 50th Anniversary of the breakthrough Beatles album which influenced me and so many – including the Britpop bands of the 1990s.

Song 17 – Blur: Parklife (Colchester)
Over the last chord, F# E in the glockenspiel finally chimes out an echo of “Parklife”.

There we go. Phew! Thanks for listening.