Although every other phrase I mentioned was Tubular Bells Live, I did have quite a few other musical experiences this year:

I had the great pleasure of seeing my Year 3 Musical Theatre students complete their degrees at The Other Palace Theatre’s studio theatre in June (coinciding with the Orchestral Tubular Bells concert, which involved a quick nip back and forth across Westminster Bridge). I’ll miss this talented, musical and supportive lot! Big thanks to my UCC team – Andy Edwards, Simon Warne, Matthew Morgan-Stevens with Rob Miles and James (Tubular Bells) Stirling in the band – the train journeys were almost as funny and moving as the performances by our girls!

I arranged the band parts for Opera Brava’s adaptations of The Lion. The Witch and the Wardrobe and Prince Caspian – performed by over 200 children at the Mercury Theatre. This turned out to be over 90 minutes of music! I do enjoy arranging as it gives a chance to bring the piano vocal music to life. This was largely written by Jenny Gould and conducted by old friend Robert Bottriell and I got to see the Thursday performance rather than watching some football.

It was great to hear Jeremy Harmer perform his songs with my string sextet arrangements for Steve Bingham, Brenda Stewart, Kate and Stuart Clow, Katy Baker and Josh Lynch. They’ve performed a few times this year and I caught a very warm evening’s performance at Royston.

A great newspaper article or two by Neil D’arcy Jones in the Colchester Gazette and Essex County Standard. This was a great promotional article for the Essex Music Services performance of our children’s oratorio Island by Jeremy Harmer and myself. We wrote this in 2013-14 for Ely Sinfonia and Cambridgeshire schools (performed at Ely Cathedral in 2015) but we were delighted to have a second performance at Chelmsford Cathedral with Essex schools. Thanks to conductor Matthew Andrews, Peter Lovell, Liz Leatherdale, Andy Heard, Bev Lockyer, John Chillingworth and the rest of the team for their work on Island. 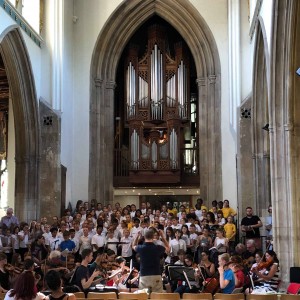 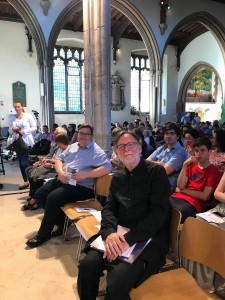 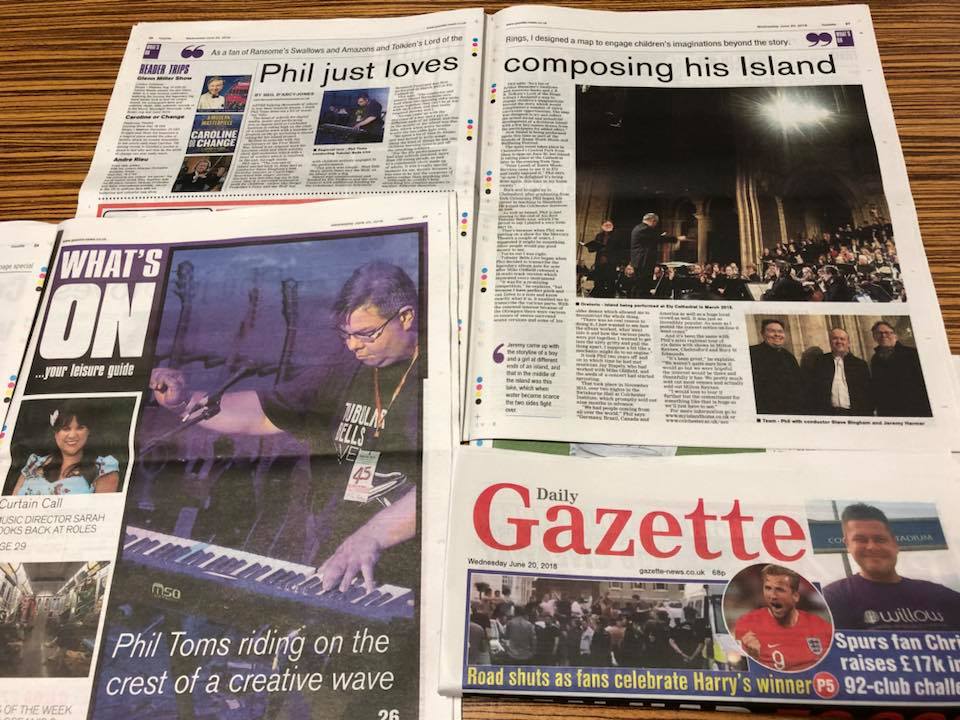 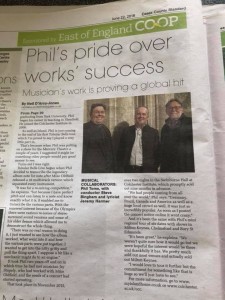 Three sets of scoring have taken up my summer – Scott Ampleford’s “The Twelfth Planet” for Doctor Puppet – is the forthcoming climactic episode 8. Scott and I go back to Episode 1 in 2010 and we’re almost there! There will also be an album release of all of Scott’s great music for this Doctor Who fan tribute which is acknowledged and enjoyed by the BBC and many of the actual Doctors themselves. It was great to meet up with Alisa Stern who flew in from New York to enjoy the recording sessions. Hats off to Scott and Zoey Cairns who will be mixing this all together!

I also have been working on some untitled comedy film score cues for composers Bob and Barn – typsetting string quartet parts for Steve Bingham, my usual collaborator.

Finally, in this 36 degree heat, I’ve been arranging Christmas carols for PartPlay, again another project with Steve Bingham and Phil Aird. 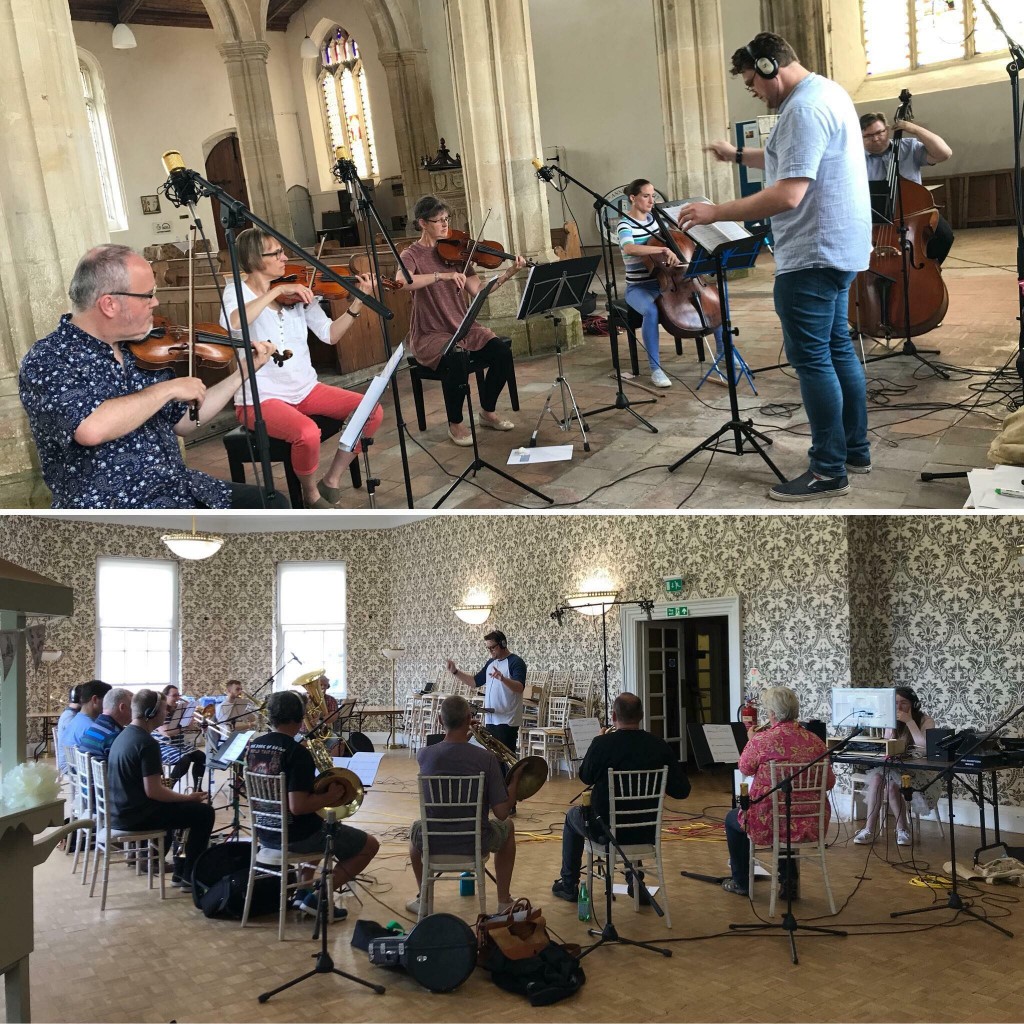 Composing my own music – and my first ever CD (or two?)

I’ve been funded by University Centre Colchester as a research project to record my first CD / download album as myself (not hiding under the skirts of my singers). This will be my Episodes for String Quartet (2010) and the newly finished Episodes for String Quintet (2018). This will be recorded in September by Steve and The Bingham String Quartet for whom it was written with the Philharmonia’s Gareth Sheppard on Double Bass. I’m pleased to have Mark Fawcett from Fish Need Snorkels engineering this with CD graphic design by Ailsa Clarke from UCC.

A second CD is planned with my Suite for Wind Quartet (2008) and a newly composed The Four Seasons for Wind Quintet (2018), with each movement portraying and dedicated to four anonymous friends, inspired by Elgar’s Enigma Variations.

I’m back gigging with Judy Dyble now that Earth Is Sleeping is released by Acid Jazz Records. It’s getting rave reviews in the papers and magazines like Prog, Mojo and more! The next gig is Saturday 28th July at Manor Farm near Oxford. 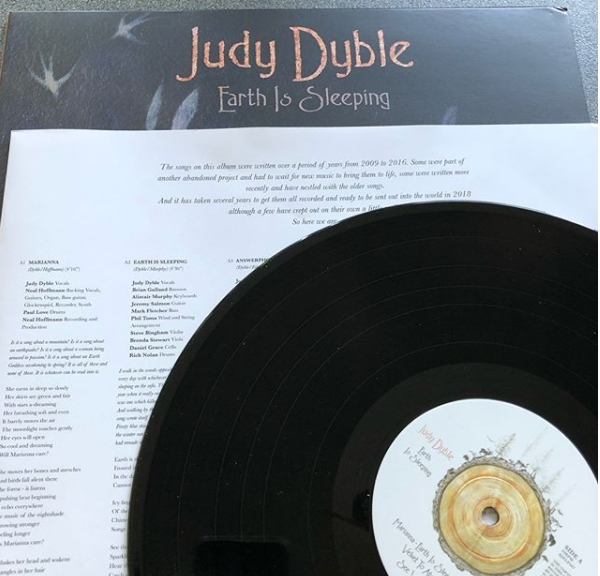 Apart from my regular Friday 1.30-2pm slot on BBC Essex with Tony Fisher and Robyn Wallis (behind the glass), I’ve just got the day job at UCC and my cats to look after so I might put my feet up for a while… or perhaps not!

There will be a performance of my Island Overture aka “The Great War” at Ely Cathedral on Sat 29th September 2018, which will be followed by Holst’s The Planets as a tribute to the final few celebrations of the end of WWI.

At Stisted Church on Saturday 10th November, there will be a performance by UCC students and staff, again for the WWI centenary – with a new setting of Poet Laureate Sir Andrew Motion’s Five Acts of Harry Patch which I am currently composing.

Finally, (for now), I also start conducting rehearsals for The Pajama Game for Platform Musicals and Plays which will be performed in the Spring.