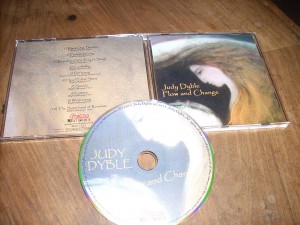 Hi all.  Here is a lovely review by Mike Davies about Judy Dyble’s Flow and Change CD.   He was very complimentary about it and my arrangements.  My favourite is The Sisterhood of Ruralists but I have a soft spot for Silence and Featherdancing.  Now available for only £9.82 at Amazon and other leading online stores.

Four years on from the folk, jazz and avant garde mix of Talking With Strangers (variously reissued in 2010,2011 and 2012), Fairport’s original female singer returns with her much anticipated fifth solo album, one steeped very much in a chamber folk style (though not forsaking her jazz colours) with strings and piano the dominant bedrock and a bank of musicians drawn from , among others, the ranks of King Crimson, Counting Crows and Spiritualized.

A reassurance that depression, fear and doubts are all perfectly natural provides the unusual the theme for the opening metaphorical Black Dog, rumbling guitar, lap steel, keyboards, snyths and Julianne Regan’s background vocals weaving a sort of dark musical box mood before, a memoir of her and her two sisters musical childhood, Featherdancing brings a suitably airy breeze the strings evoking images of cafe orchestras.

Family also informs piano and strings lullaby Beautiful Child (Freya’s song), a darkling-tinged hope for the future dedicated to her granddaughter that leads naturally, if a little pessimistically into Crowbaby, one of the more musically experimental numbers with its scratching effects and brooding guitar splinters, which sees childhood as a brief era of peace and protection before entering the carrion demands of the world.

Yet these four numbers are merely a prelude to what follows with the tranquil all things much pass reverie of Driftaway, the progressive-folk 60s sound of a deceptively gentle Head Full Of Stars, the loneliness-laden Silence with the string section compounding the oppressive melancholia, Letters, a stately, almost medieval at times, piano backed duet with Matt Malley about parted lovers doomed to remain separated thanks to the inefficiency of the postal system, and Wintersongs, a tender remembrance of lost love soothed by piano and cello.

Then comes the album’s closing tour de force, the nigh 12 minute Sisterhood Of Ruralists, a celebration of a modern-day Pre-Raphaelite creative collective of artists (many of whose work is featured in the album booklet) that, beginning with piano chords reminiscent of Procul Harum’s A Salty Dog, shifts time signatures and moods as it goes, unfurling an enchanted pastoral atmosphere that reflects the mythical and nature imagery of the lyrics as she captures the paintings, jewellery and glass work in song. A true treasury.

PS. We are rehearsing this weekend for the Summer of Love (private festival) in Kent on 27th July.  The Judy Dyble band will actually perform together again rather than multi-tracking and dropboxing from several corners of the globe!

UPDATE: And another: From Progarchives:

***** She is back! The great Judy Dyble with her beautiful voice. What a great album, a follow up to the acclaimed former album – talking with strangers. In my opinion Judy Dyble is one of the great singers of our era. From Fairport convention, early King Crimson period with her astonishing “I talk to the wind” version, the amazing Trader Horne album and to our days with all the great albums she make. Her new album is very quiet I would say magical. The starter Black Dog Dreams is a powerful beginner, followed by Featherdancing ? a wonderful song about 3 sisters who wanted to dance. Beautiful Child is a sweet song followed by the powerful Crowbaby. The last song is 11 minutes long and is a great closer to this magnificent album. I can’t stop listening and I wish Judy Dyble will keep on singing and bring us joy. This album is somewhat progressive in the veins of the great prog folk albums of the 70’s like Trees, Fairport Convention, Pentangle with the unique undistinguished voice of Judy Dyble. Enjoy.