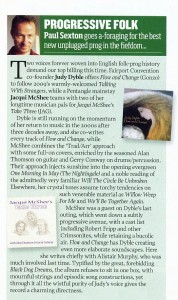 Anyone who has a keen interest in these things – or was around at the time (like me!) will recognise the artist whose latest album this is as being one of the founding members of Fairport Convention, and lead singer before Sandy Denny took over the role for their seminal ‘What We Did On Our Holidays’ album.

Difficult to categorize (although “prog folk” might be a suitable peg on which to hang the album, given that the magnificent album closer ‘The Sisterhood Of Ruralists’ is nearly 12 minutes long), it could be argued that this release is the pinnacle of Dyble’s somewhat uneven musical career, and features no fewer than eighteen collaborators including Julianne Regan (All About Eve), Pat Mastelotto (King Crimson) and Matt Malley (ex-Counting Crows).

Very much at the “softer” end of what we include in Fireworks, this sits squarely in singer/songwriter territory, and should be adored by anyone who is partial to albums by, for instance, Loreena McKennitt, Carole King, Iona, Mermaid Kiss and Sally Oldfield: but without being the clone of any of them. The imaginative musical arrangements mainly comprise piano and strings with percussion plus bass and drums, while the use of various guitars, dulcimer and wind instruments add poignancy and atmosphere to those songs where used.

Dyble has an expressive, if rather understated, vocal style and on some numbers she is multi-tracked while on others Regan provides effective backing vocals. On the wonderful ‘Letters’ about love letters not sent resulting in an utterly unfulfilled relationship she is joined by Malley to present the man’s side of the story! Tremendous!!  All sorts of human frailties and existential experiences are touched upon, and ‘Black Dog Dreams’ will, for example, resonate with any who have suffered from depression, while ‘Drift Away’ make rekindle the hurt experienced when a long-term relationship dissolves, when ‘Silence’ (about intense loneliness) may deliver another glancing blow. But it’s not all sad, and the likes of ‘Featherdancing’,‘Beautiful Child’ and ‘Head Full Of Stars’ provide an effective and upbeat counterbalance.

A very personal, intimate and atmospheric album, this is one to be treasured by anyone whose musical taste encompasses this end of the spectrum, and can take the draining emotionality of some of these songs.
Paul Jerome Smith